What I love about In Conversation With… is that it shows the variety of tea towels that are around, if you want one.  Why would anyone buy a value-pack of blue check tea towels, that disintegrate after a few washings, when you could buy one, or two, really beautiful tea towels, good quality, hard wearing, that will last forever.  So far, three very different designers, very distinctive styles, not in competition with each other but with one shared value: quality.

Now it’s time to meet a fourth: the Radical Tea Towel Company.  This is another company whose work I think is brilliant and, if I saw one of their tea towels hanging on a hook in a friend’s kitchen, I would know exactly where it came from.  I’m a great believer in simplicity and honesty; I’m a great believer in the adage “it does what it says on the tin”.  You know where you stand as a consumer.  If you name the company after someone, you expect that they will be responsible for the designs; I expect Love Menu Art to be about Menu Art.  Simples.  So are you ‘setting yourself up’ if you call yourselves the Radical Tea Towel Company?  What does a title like that mean?  What does the customer expect? 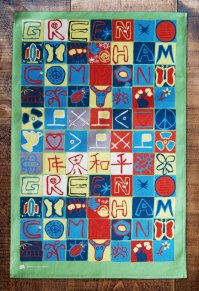 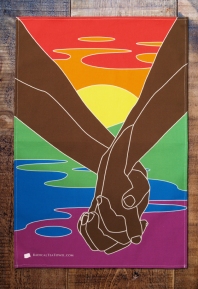 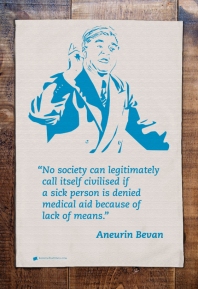 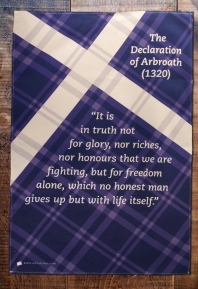 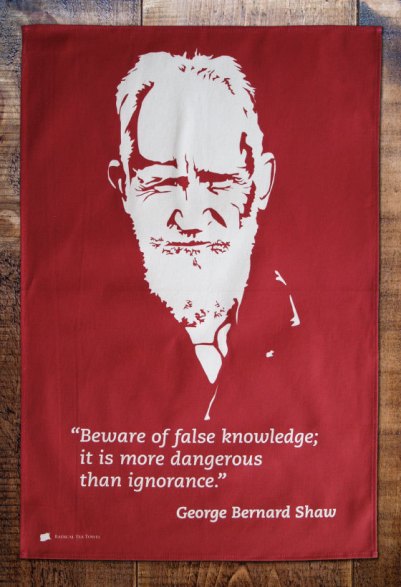 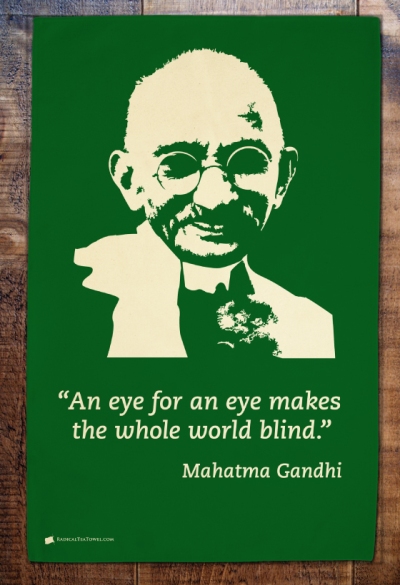 The fact is that the Radical Tea Towel Company is just that, through and through, from it’s founding to it’s working practice, from the goods that it produces to it’s ethical policy, from the means by which goods are produced to believing in what it does.  It also sounds like good fun!  Here is their story:

“We are a family company.  We started as a small project in Autumn 2011 but didn’t incorporate until 2013.  Beatrice is a language teacher in French, Spanish and Welsh.  She was on the same Modern Languages course, at Durham University, as Tim, in the early 1980s.  They got married after graduating.  Tim is a graphic designer and publisher by background.  He is self-taught, after messing around with computers in 1990s.  Luke is their son who does have a background in politics, having studied it, alongside other social sciences, at university.  Before the Radical Tea Towel Company, Luke worked for London Underground”.

So how did the Radical Tea Towel Company come about?  “Beatrice was looking for a suitable, politically left-wing birthday present for her late mother’s 92 year old partner, David.  David was severely disabled, after a hip operation that had gone wrong.  She didn’t think he would wear a T-Shirt and bulky stuff, like mugs, wouldn’t go through his letter-box.  She didn’t want to involve him trailing out to the Post Office, on his crutches, to collect a parcel.  Beatrice thought there must be political tea towels out there, which would be ideal but hours searching on Google found nothing.  Around the dinner table that evening, she was moaning about this – and Luke and Tim encouraged her to start her own political tea towel business.  We agreed that Beatrice would find the manufacturers, Tim could do the designs and Luke would build our social media presence.  We started with ten initial designs and slowly boot-strapped our way from there”. 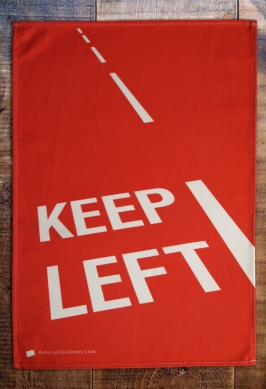 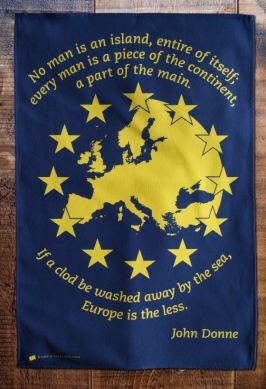 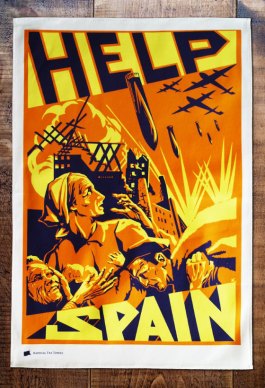 “We have over 80 designs now and several more in production, shortly to be released.  We’re still coming up with ideas faster than we can get the designs out.  Tim is our chief designer and he’s a really talented guy.  The whole team feeds in ideas, and gives feedback on the first drafts though, especially on finding good quotes.  We’ve also used a freelance designer in the past.  We are always getting recommendations from customers, friends and family, all of which we add to our short list to think about.  Then once every few months we sit down, as a team, and debate which designs we want to be done.  There’s normally some impassioned debate and a voting process, if we don’t agree – it’s all very democratic , of course”.

“We sell mostly online, through our website.  But there’s a number of retailers around the country, mostly museum shops and booksellers, who stock our products and we have some great partnerships with them.  Make sure you check out, and support, your local radical bookshops, by the way; there’s a number of them throughout the country and they are a much better alternative to the usual book industry giants!”. 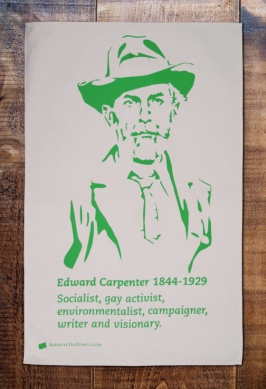 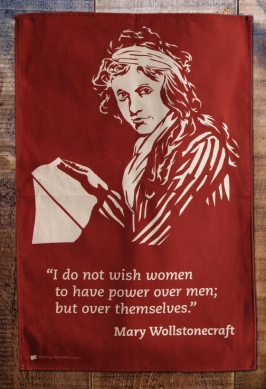 So I can see that all your tea towels have a message, radical but not necessarily in agreement with each other.  How does this work?  “Our central message is one of equality and fairness.  We believe we should all play by the same rules with no special privileges for the well-connected or wealthy.  On social media, we aim to produce a healthy and lively debate on political, philosophical and social issues but will never tell anyone which political party to vote for in an election.  Our products generally depict the Radical Movements, and figures, of the past and present, with a particular emphasis on left wing values.  However, this should not be taken as an endorsement, by ourselves, of the movement, or the persons, depicted, their actions or the consequences of their actions”.

“More than that, we work with family members and still get on!  We use natural, unbleached finishes, eco-friendly water-based inks.  Fabrics are woven in either Turkey or US and finished in UK.  To our knowledge no child labour has been used and employment practices are good.” 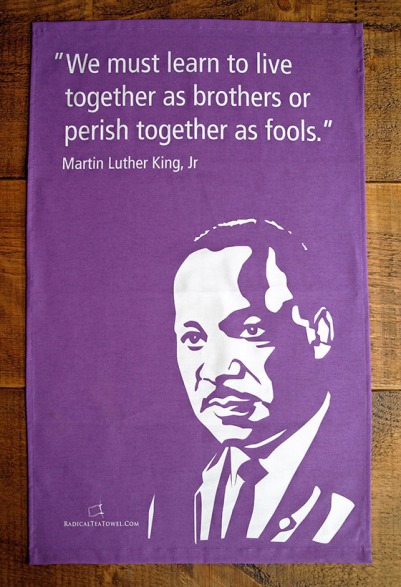 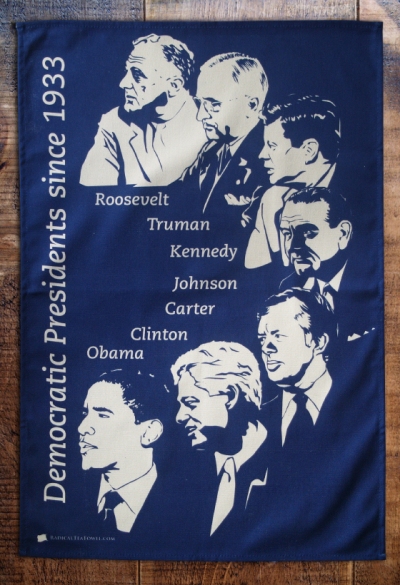 There are two other areas of the work of the Radical Tea Towel Company that I am interested in: the Newsletter and the recent award of some small grants, by the Radical Tea Towel Company.  “We used to send out emails around Christmas time, just letting people know about the latest designs we made.  But Luke was speaking to people about the best way to use our mailing list, as a way to communicate with your customers, and some customers were even asking for more stories about the characters on our tea towels.  Luke enjoys writing so just started putting together these histories based on our tea towel designs.  It’s become an important part of the business – people like hearing stories and reading interesting stuff; it’s much more engaging than traditional sales copy and we love getting encouraging messages from people who read the emails”.  I am on the mailing list for loads of email newsletters and, I have to say, that the emails from Radical Tea Towel Company are the ones I always read; many others don’t see light of day.

“We’ve always hoped that our business could be a vehicle for raising awareness about politically important causes, both in history and today.  We do that through the designs, but it’s also nice to help in a practical/material way, when you can afford to give something back.  Even small amounts of money can make a real difference to some causes: for example, the money we sent to CRIBS International helped house a refugee mother and her children.  Many people have noted the connections between some of our designs and issue-based campaigns today; it’s nice to make that link more explicit.  We also know that our customers are full of ideas for great causes to support and we wanted to ask their advice about who would most benefit from the money”.

As a true lover of history, I am amazed that someone would think of creating tea towels from some of the more obscure political movements that many people will not have heard about (since history is no longer a compulsory subject on the school curriculum): things like the Tolpuddle Martyrs, the Chartist Movement, Spanish Civil War, Owain Glyndwr, the Jarrow March.  I think some of the issues on these tea towels demonstrate what children are missing and hopefully people are inspired to read further on the social history of Britain. 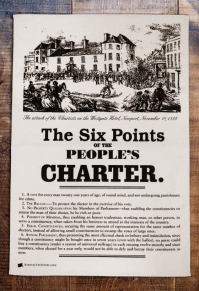 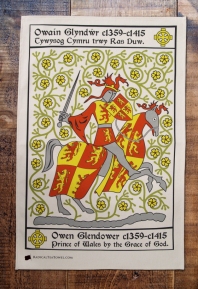 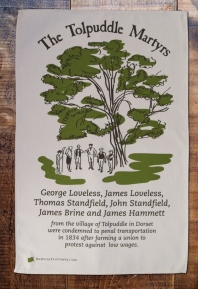 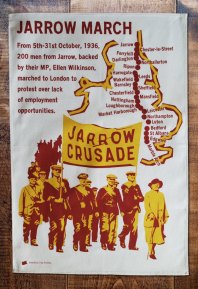 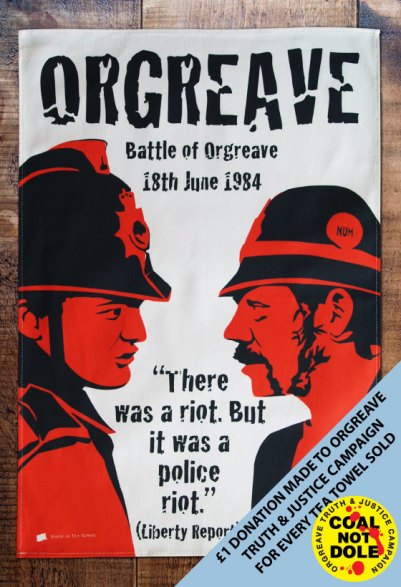 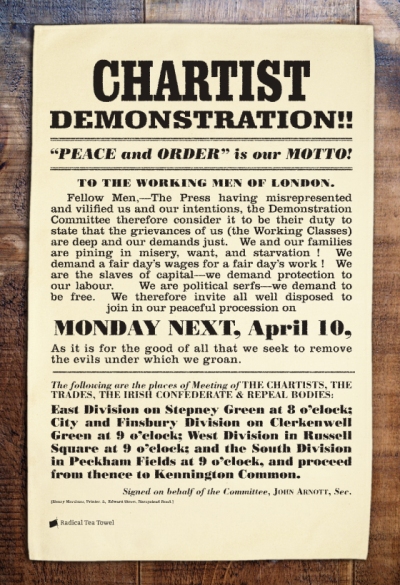 Thank you to the Radical Tea Towel Company for their time.  It is a fascinating tour of the social history of Britain, and the wider world, one that many people may miss out on unless they do the wiping up!