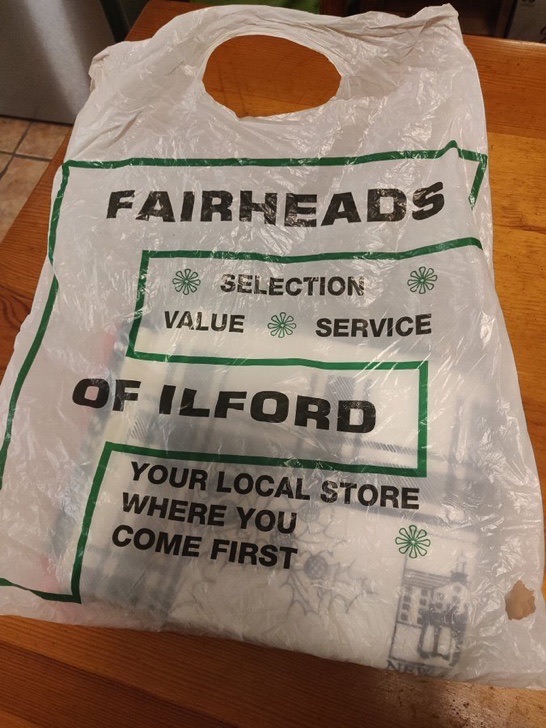 A lot of people enjoy Social Media Platforms like Twitter and Instagram; some people avoid them because of their reputations (often true) of the harassment and unkind, maybe hateful, comments people make. The option to ‘Block’ people is always there but sometimes it comes too late; you may have already experienced some viciousness. One compromise is to still use those Platforms, by having ‘handles’ that do not reveal the name you are known by. If you have strong political views, or are in a position that makes you publicly visible, this is often a choice people make. It’s not so bad if all you do is to write about is tea towels!

I ‘met’ bagladytravels.wordpress.com on Twitter, where she is also known as @eastendtwit. At the beginning of Lockdown Number 3, where sitting in the garden in the warm sunshine was not going to be possible, I called out to people using Twitter, asking them to share pictures of their tea towels which I would include in the Virtual Tea Towel Museum. They came flooding in (obviously a lot of other people were bored in Lockdown). Some sent only one picture, others lots; some had ironed their tea towels and others hadn’t. There were (and still are) hundreds coming in. Threads developed, which had nothing to do with me, but fascinating none the less.

One day, in response to someone living in Glasgow, I posted my only two tea towels from Glasgow, the Willows Tea Room on Sauchiehall Street and the Willows Tea Rooms on Buchanan Street. It was at that point bagladytravels took up the gauntlet. “So, I’ve found the Glasgow one. I must have had about eight of these, as I’ve given loads away. They came from a really old school draper in Ilford, Fairheads, long closed, very quaint. They had loads of tea towels, obviously a ‘buy out’ and I found some Scots ones”. Bagladytravels even had the picture of a bag from the store! Fairheads of Ilford, whose strap-line was ” Your local store where you come first”; a great strap-line.

At this point I invited bagladytravels to be a Guest Tea Towel. Somehow, I thought, this is beginning to be a story, not just of a Glasgow tea towel. I wondered if she had any connection to Glasgow. “I’m a Glaswegian but grew up from about 5 in the Home Counties, then Highgate. I’ve lived in East London first, Bethnal Green in my 20s, in the first warehouse conversion (a friend bought a flat there, as we realised we probably knew no one else in East London). The area had a bit of a reputation then, even though it was fine to live there, just a bit boring but very central, close to the Bagel Shop too, for late night bagels. Then a move slightly further east to Bow. Three friends also buying at the same time; we moved around in packs!

So Ilford always seemed like the end of the world, or the far end of Number 25 bus route. But the secretaries at work would describe Ilford as a ‘bustling town centre’. One Saturday afternoon, I went to see what the fuss was about. It was definitely not my cup of tea but the M&S and T.K.Maxx were my main attraction. I had a nose around, I’m quite the traveller and happened upon Fairheads (closed 2008). It reminded me of a 1960s drapers in Glasgow called McCalls that were old-fashioned even then (still going strong). Proper throwbacks.

I used to pop to Ilford, on odd occasions, for T.K.Maxx to top up my work work wardrobe. Fairburns was like a miniature ‘Grace Brothers’, but only selling linens. Quite famous in Ilford, apparently. Bingo. Cheap souvenir tea towels with no reference to Ilford. I saw the tea towels and went for the Scottish ones. They had them from all over the country, must have bought up the overdubs or quality-control failures. I love throwback shops. I used to like going past ‘Blustons Gowns’ in Kentish Town (closed 2015) on the bus, genuine 1950s frontage and the stock looked much the same, but not trendy 1950s, more like sturdy dresses for ladies of a certain age. I think I found my best old store in Saigon, an old French department store, French cockerels, cast in bronze, on the staircase. I expect only the French colonial wives would have entered this fine emporium, back in the day

To the tea towels: The first I spotted was Glasgow. Old. The Transport Museum (bottom right) must have been the old one at the Tramway and the Burrell was probably still quite buzzing new. I have taken these as gifts to South Africa, USA and India. New Lanark, bought in the Bargain Corner at Fairheads. My parents had an option on a place in the Counting House as a holiday home. Must ask Mum what’s going on, whether she let it go. It’s a World Heritage Site on the Falls of Clyde. 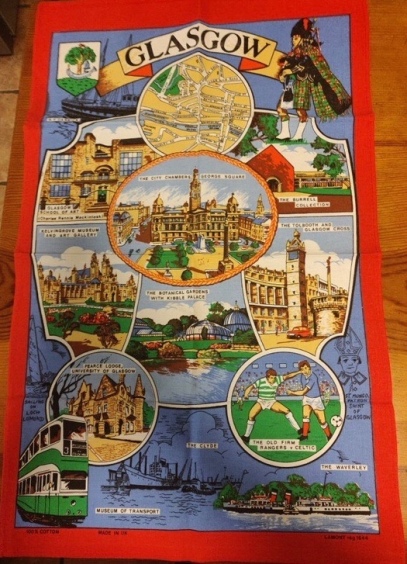 ‘The Covenanters Heritage’ was also from Fairheads. The Saturday girls there wore nylon overalls and kept saying “Yes Madam’, all very nice and smiley. Now the Covenanters were a bit of a dreary lot, not party people, hence my knowledge is very limited. My final one, in contrast, from one of the fancy independent shops in Byers Road in Glasgow, a linen exploration of the fun of the Scots Language. I can confirm I went for a stroll in London today and it was dreich and I got drookit” 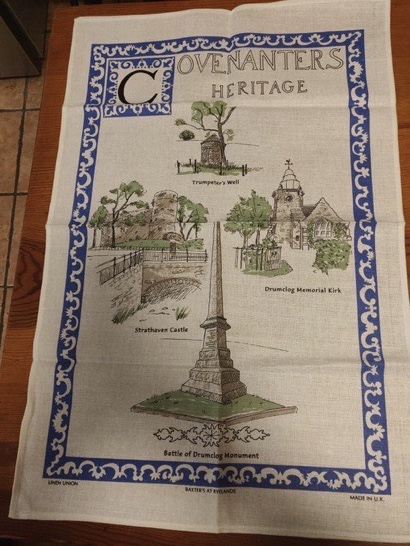 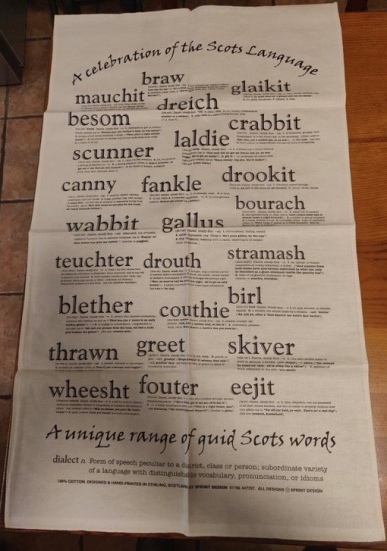 Thanks to bagladytravels for the great story. I believe that tea towels should be seen as part of the social history of Britain and they can provoke memories of other things linked with tea towels, like Fairheads of Ilford (should you want to, you can find old photos of Fairheads and even a video of Cranbrook Road where they were located). There is a Blog called “Remembrance of Things Past’, written by alan001946.wordpress.com, if bagladytravels has tickled your interest in Ilford. Of course, there is Blustons Gowns in Kentish Town. I must keep my eyes open for these ‘throwback’ shops, not a term I am familiar with.

And I finish on a quote from bagladytravels: “Tea towels are as mad as balloons but I do think that souvenir items tell quite a story and that local museum archives should keep them too”. Well said!