My name is Barbara Howard and I am a woman with an obsession about tea towels.  I believe the first tea towel that I bought, for my own usage, was in 1970, in the first few months of my time at Swansea University.  I discovered that, if I wanted to make drinks or eat something, this always involved doing some washing up.  If I washed dishes then they needed drying or someone else would do it and pinch my crockery.  So I bought my Welsh Language tea towel; but once I had that one then I wanted another one, a different one.  At university, I really only needed two, at the most, so I started buying them for my mother – Christmas, birthday, any excuse.  Every holiday, or day out, I would try and find a new tea towel.  At university, when you have little money, buying tea towels was a luxury; my preference was always a tea towel over a new item of clothing.  My collection gradually grew.  In 10 years, my collection of tea towels was certainly greater than anyone else’s that I knew.  It became a kind of secret obsession because, at 20, it wasn’t cool to be collecting tea towels.

My degree was in geography; I had always loved travelling around, seeing different parts of the country, exploring new areas.  There was always an opportunity to buy a new tea towel.  In 1982, I joined the National Trust; this meant that I could go to a lot of properties that sold tea towels.  It is very easy, and quick, to establish a collection; I got hooked.  Nearly fifty years later, I am still buying tea towels, a lot of tea towels.     My full collection is probably about 1100, or maybe a few more.  My view is that a tea towel is a usable, and useful, item, that should be used for its original purpose – wiping up.  And that is what I do.   I am slightly obsessional about the rotation of my tea towels. 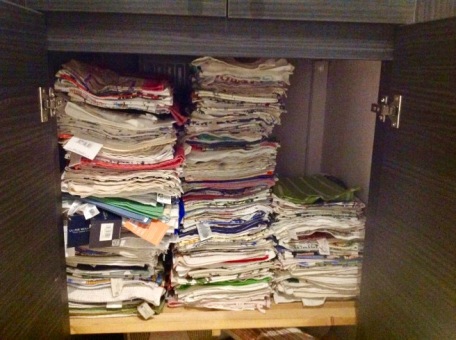 I used to store my tea towels in the airing cupboard in three piles: right hand side for those being currently used, left hand side for those that had just been used and washed and the middle would move to the right hand side once the pile had gone down.  But, of course, as the middle pile became the right hand side they also needed to be reverse-turned to keep them in order.  It became so complicated.  By the end of 2016,  those three piles were all completely full, no room for manoeuvre.  I had to develop a new storage system.  I have to thank my friend, Lynn, who listened to me for hours about the problem of storing tea towels and helped me ‘problem-solve’ the whole storage issue.  Now I have a much more sophisticated system: ten tea towels hung on a trouser/skirt hanger (similar to those used in M&S), each hanger numbered, housed in a large built-in wardrobe.  No one can imagine the pleasure I get from strolling along the wardrobe, glancing my hand along the rows, taking a peep at, perhaps, number 491 (which happens to be The Shipping Forecast areas).

My tea towel obsession has been something I haven’t talked about very much, not a secret  but not something that was widely known about.  I worked for 41 years in the field of social care, in many roles from an Instructor in an Adult Training Centre to a Mental Health Act Commissioner.  Tea towels aren’t a big topic of conversation in the field of social care; I never had the option of sitting in a Case Conference discussing my tea towel collection!

As I moved nearer my ‘pension age’, most people I worked with thought I would never retire; they believed I was a workaholic.  I knew different.   All I needed was something that would engage my interest, a complete change, that would make retirement the beginning of a new adventure, not the end of something.  I didn’t want to be a volunteer in a charity shop or play golf or join a rambling club.  It was going to be something linked to my tea towel collection.  Then two things happened: firstly, I heard Pat Albeck, my favourite tea towel designer, being interviewed on ‘Desert Island Discs’.  She was inspirational; I know I have a lot of her tea towels but certainly not the 300+ she had designed.  Secondly, I watched the film ‘Julie and Julia’; the true story of Julie Powell who decided to write a Blog about her ‘journey’ to cook all 524 dishes in ‘Mastering the Art of French Cookery’, written by Julia Child. What could be more different for me than writing a Blog about my tea towels?  Much to the surprise of my friends, I posted my first Blog on 18 April 2015, followed by my first actual blog about a tea towel on 28 April 2015 (Egypt); there has been no stopping me since.  In this process, I have embraced IT (much to the surprise of all my friends), learnt a few new skills and I just love Blogging.  Blogging has given me the opportunity to write, stretch my memory back 50 years, research places and events, remember happy holidays, reflect on sad times, reminisce about friends and family sadly no longer alive  and to include friends and family who are ‘alive and kicking’, in my Blogs.  To date, I have written about 855 Blogs, covering nearly 970 tea towels; a lot more still to go.  If you are interested then go to http://www.myteatowels.wordpress.com

Friends (crazy friends) have often said that, with so many tea towels, I should open a Tea Towel Museum.  Now that is something that I would have liked to have done.  But the reality is that tea towels are quite large and to display my collection would take more space than I could conceive of having.  Then I thought “What about a Virtual Tea Towel Museum?”.  And I got very excited.   Before I could open a Virtual Tea Towel Museum I needed to do some preparatory work:  I have re-photographed all 800 (at that time) of my tea towels (with the help of Isabella and Benjamin, the cats); I have hung all my tea towels on numbered hangers; I have catalogued which tea towels hang on which numbered hanger; I have sorted all my tea towels into ‘collections’; I have identified some tea towels that I would like to go in search of.  I could be the Curator!  I always wanted to be the Curator of a Museum, finding out about the exhibits and caring for them, logging the exhibits, increasing the exhibits, arranging ‘special’ exhibitions and much more.  I could be the Curator without having to apply for the job, without going for an interview, without the threat of being disciplined, or sacked, if I didn’t do the job well.  I could work from home, no commuting for me.  I wouldn’t have to wear posh clothes or conform to a dress code.  As Julia Child once said “Find something you are passionate about and keep tremendously interested in it”.   So this is what I am going to do and so here we are: Barbara Howard, Curator of the Virtual Tea Towel Museum.  Welcome to my world.