My first ‘conversation’ is with Stuart Gardiner who, working with his wife Sam in Stuart Gardiner Designs, is responsible for some amazing Infographic Tea Towel Designs.  Once you have seen one, you will always recognise his others, good brand awareness; they are visually compelling.  I am a big fan of Stuart’s designs because they are always so handy in preparation for a Pub Quiz; they provide you with the knowledge you always wanted to know, but never had.

If you didn’t know (but I am sure any Museum Visitor will know), an Infographic is a representation of information in a graphic format, designed to make data easily available at a glance.  Infographics predate writing, as a means of disseminating information – cave drawings are the earliest known example.

Young children often have a clear idea about what they want to be when they grow up: train drivers and astronauts are popular choices.  Did Stuart Gardiner always want to be a Tea Towel Designer?

“At Primary School, my dream job was to be a Super Hero but after that I had no idea.  I’ve always been drawn to Typography and graphic images and illustration.  My degree course was at Falmouth University in Graphic Information Design.  The course allowed me to explore my own ideas in this field.

My first job after university was designing packaging for joysticks for a Gaming Company.  It wasn’t very exciting.  After that I went into the music industry, designing album covers etc which I realised, after a few years, was a dying business.  Going alone seemed like the only option for me after that and I had a lot of ideas…..

Tea Towel designing began in 2009, and thanks to some encouragement from the then buyer at Liberty, the rest as they say……..

I have been commissioned by Liberty of London, Lurpak – A Homage to Baking and Selfridges Ocean Project.  Now, most of my work is for my own company.  I think I have designed about 21 tea towels (18 in my own range) and am currently designing three more to launch this year”

I asked about the ‘Tongue Twister’ tea towel which didn’t seem in keeping with some of the Infographic designs: “The Tongue Twister design was one of my first.  I didn’t have a set idea, at that stage, of which direction my range would go.  It (the Tongue Twister) was the ultimate design to indulge my love of typography.  At that point, I didn’t know that food and drink would become such a never-ending subject matter to me.  Tongue Twister is different from my others but at the time it didn’t stand out too much. 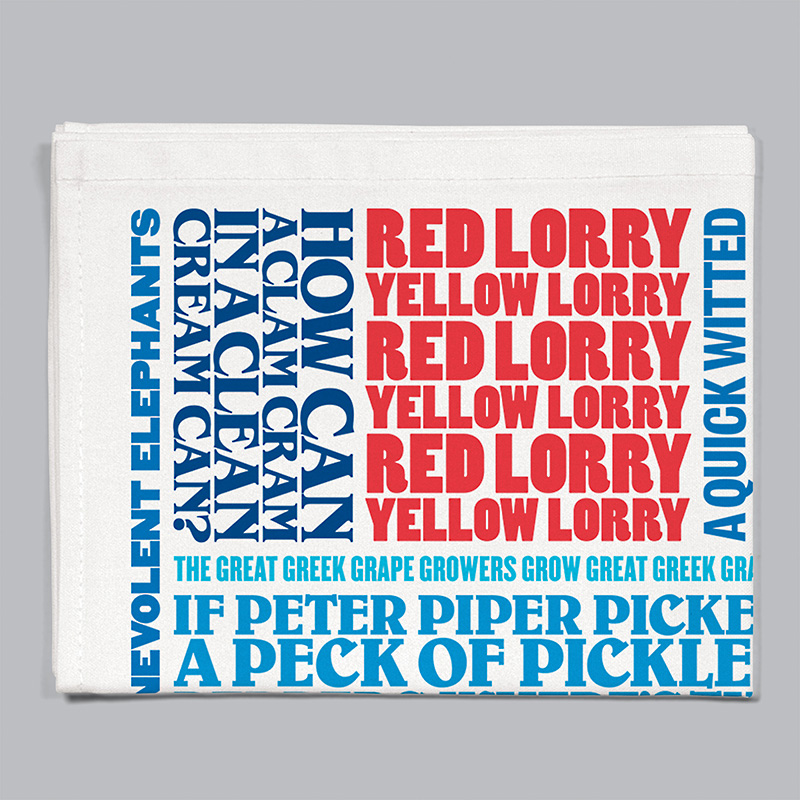 My first Infographic design was ‘A Seasonal Guide to British Fruit and Vegetables’.  It was originally going to be a print to frame and hang on the wall but I thought a tea towel would be handier and always in the kitchen.  Everyone needs a tea towel.  This was the start of our Infographic Tea Towel adventure.  The initial idea was to make the information easy and accessible to consumers.

My best selling designs are the guides to pairing wines with food.  Not the most visually exciting but they are chock full of information, on a subject most people don’t know a lot about but would certainly would like to.

My personal favourite is ‘Beers of the World’, as I thoroughly enjoyed the research!

I sell my tea towels both via my own website (see the Virtual Tea Towel Museum Shop) as well as wholesaling to other retailers around the country, and the world.  I do not have my own shop and have no plans to go down this route.  I do exhibit at Trade Fairs like Top Drawer, in London, where I will be exhibiting in September and have just exhibited, for the first time, in ‘NY Now’.  We have found this to be the best way to meet buyers and show our range.”

I wanted to know how long the process takes to produce a new tea towel.  “Too long.  Designs require a lot of research before they even get to the design stage.  It takes, on average, 9 months, sometimes more, sometimes less, depending on the subject matter.  I usually have 2 or 3 on the go, at the same time, as we are often working to a Trade Fair deadline.

I never intended my business to be focussed on tea towels.  We do sell other items linked with the culinary-themed Infographic homeware like trays, oven gloves, coasters and mugs.”

Finally, I wanted to know if Stuart had any unfulfilled ambitions: “To be a jazz musician or a professional skateboarder but in reality it is tea towels”.  Thank you Stuart Gardiner!  You will see several of Stuart’s tea towels in the Collections.