TEA TOWEL FROM SICILY
(To Say Nothing Of The Pottery) 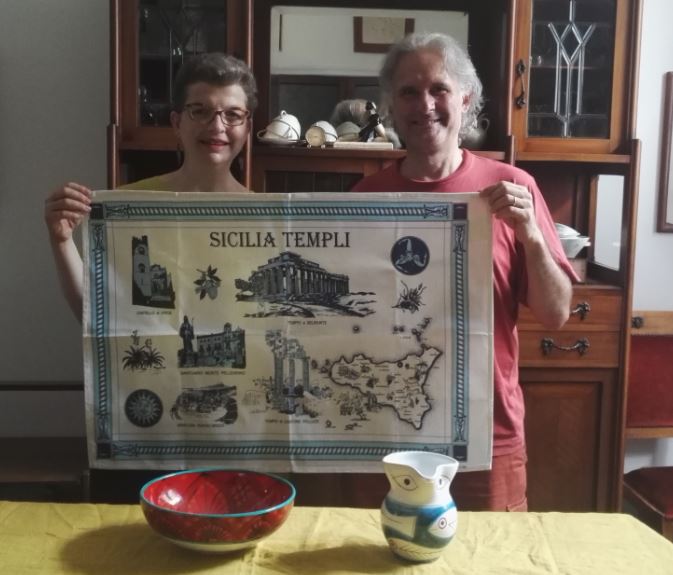 Why should an Italian chap write a blog on tea towels? Let’s consider the matter point by point.
Point 1: Tea
Italians drink espressos or cappuccinos, the former all through the day, the latter only at breakfast. We do drink tea, proper tea or herbal tea, however, since it’s a tradition coming from abroad, don’t be surprised if you are offered fruit tea at breakfast or Earl Grey with milk.  An old 19th Century Italian recipe states: “Put a pinch of tea in cold water and boil it for half an hour, filter and drink it with red sugar if you want a purgative. You may cool it down; in this case, you’ll squeeze some lemon and drink it as a restorative”.  We haven’t made a long way from since.  Going to a bar, asking for tea, may lead to an upsetting experience.  I remember been served coffee instead of tea, the barman evidently too careless to distinguish ‘tè’ from ‘caffè’, the two words sound similar.  Tea will be served in a cappuccino cup, thick, narrow at the bottom and wide at the top, your scorching tea will never cool down.  If you are craving for a lovely cup of tea, suitably served, you must end up in tea-shops, generally speaking posh and expensive.

Point 2: Tea Towels
As you imagine, there is no such a thing in Italy as a tea-towel, we have “kitchen cloths” with no true decoration, printed maybe with just coloured bands or simple geometric motifs. What you do find are souvenir “kitchen cloths”, crammed with coloured motifs such as regional products (pasta, oil, wine) or well-known monuments, nice looking, but definitively a tourist item.

Point 3: English
Finally, let’s consider the issue of my broken and rusty English, a language I deal with with great effort.  Born to an English mother, I was brought up in Italy; there isn’t much I can do.  Moreover, English people tend to be not exactly comprehensive when it gets to judge how people speak the mother tongue.  No wonder I felt rather uneasy having to write down these few lines about my favourite tea towel for the opening of Barbara’s Virtual Tea-Towel Museum on 1 July 2017, but, for no reason on earth,  would I have disregarded my cousin’s invitation!

So, let’s get to the point, my favourite tea towel
Which will I choose? Will I talk about my birth tea towel with the 1959 calendar, or the “God Save the Queen” one that I bought in May 2016 at Buckingham Palace souvenir shop? The Union Jack? or that one with a Piccadilly Circus scene, so worn out that I would date it to the sixties?  I decided I’m going to pick a 2016 tea-towel from Sicily.

Sicily is my much-loved Italian region, a large island facing north Africa that attracted the Greeks, Phoenicians, Romans, Arabs, Normans, the Anjou, the Spaniards and finally the English, over a period of 2500 years; most of them leaving splendid traces of their passage.  If you notice people with gorgeous deep blue eyes, you will immediately know they are of Norman origin; when you enjoy a lemon or almond granita (fine grounded ice), be grateful to the Arabs who introduced those plants, among many others.  We owe Marsala wine to the English trader, John Woodhouse, in 1773.  Greek archaeology brings us to the towns of Siracusa, Agrigento, the Valley of the Temples, Selinunte and Segesta and Trapani with its salt-works.  We won’t forget the Roman Villa del Casale, near Piazza Armerina, with its impressive mosaics, neither the Norman fortress in Enna nor the Baroque cities of Ragusa Ibla and Modica, the latter well-known for its chocolate; on we go, with the paintings of Antonello da Messina and Caravaggio or the stuccos of Giacomo Serpotta in Palermo. Yes, Sicily is a true melting pot.

You may trace this blend of cultures through the magnificent cuisine Sicilians offer you all over the island.   I wish I could describe what the inhabitants are able to do with food; it’s a wonder, they really show they know how to live.

We bought this “souvenir-cloth” outside the archaeological park of Selinunte; we arrived there early in the morning to avoid the crowds of tourists and the ferocious sun of Sicilian summers.  The park is huge, there are miles to walk (electric shuttles are available), but it was a true experience to walk by all those ancient ruins, deep in silence, under an immense blue sky and facing the vast sea.  In the photograph, you may notice also two examples of Sicilian pottery, the red bowl being an unusual item, since this variety of red is produced only in a minor area by Mt Etna, the well-known volcano. We loved also the archaic-flavoured decorations of the blue jug, with its fish and eyes that reminded us of the extent and beauty of the sea around Sicily.

Unfortunately, Sicily has no positive reputation, we know that.  When Elena and I got married 25 years ago, the intention was to spend our honeymoon there.  It wasn’t easy to organise journeys, in those days, with no low-cost travelling, no B&Bs, no internet searching and booking.  Instead, it was the moment of the Mafia’s last massive attack against the State: in conclusion, we hung around in Tuscany.  It took another 21 years before we managed to settle down, with a family and jobs, and go to Palermo (2013); it was our last holiday with our two children.   It was love at first sight;  Elena and I returned another three times.  Sicilians were helpful and polite, and I can say you can enjoy your holidays without much concern – Florence would be worse, believe me.  Three things should probably worry a tourist in Sicily: heat, a badly organized transportation system and the siesta. Do you remember the 1972 film Avanti! directed by Billy Wilder with Jack Lemmon and Juliet Mills?  It was set in Ischia and one of the recurrent gags was about locals going to rest after lunch; no way anything could be done until the siesta ended.  45 years on and things seem to be more or less the same; don’t hope to visit a museum or go shopping soon after lunch.

In 2018, Palermo will become the Italian Capital of Culture; consider this seriously as a hint…
Andrea, Florence (Italy) 1st July 2017