The first thing that  everyone says, when invited to be a Guest Tea Towel, is “I don’t think I have any interesting tea towels, with a story”, rapidly followed by “I will have to iron my tea towels before I photograph them!”.  (I think I am the only person in the world to always iron their Tea Towels, but never socks, duvets etc).  Kate said the first and did the second.

I met Kate in the Creative Writing Class that I joined last September.  Being a Guest Tea Towel was something on offer to everyone in the class.  I know that Kate is an artist; I’ve no idea what medium she works in but you can tell she is an artist by the way that she not only has ironed her tea towels, but also hung them for display.  The washing line is by far the best way to photograph tea towels that are being used (i.e. not framed).  She knows how to display her work!  Let’s hear Kate’s story:

”As promised here are the tea towels that I own, that aren’t just plain ones.  I’m really not sure how I acquired most of them but here goes.

I suppose the Cornish Recipe one was picked up on one of my many trips down to my favourite county.  It’s the sort of thing that my husband would impulse buy.

The striking fox one is a mystery.  It ‘appeared’ in the dresser drawer several years ago.  I suppose it could have belonged to my late mother-in-law and was acquired when we cleared out her flat.

The ‘If You Wash I’ll Dry’ tea towel was a present from my elder daughter, a couple of years ago.  The script writing is embroidery.

The Pooh Bear one must have come from my younger daughter, as she was always Pooh-mad.

The last one must have been acquired by me, probably one of those Collect-the-Tokens popular offers in 1980s.  I should think I couldn’t resist it (a) because it is yellow, my favourite colour and (b) because it features coffee, which I can’t do without! 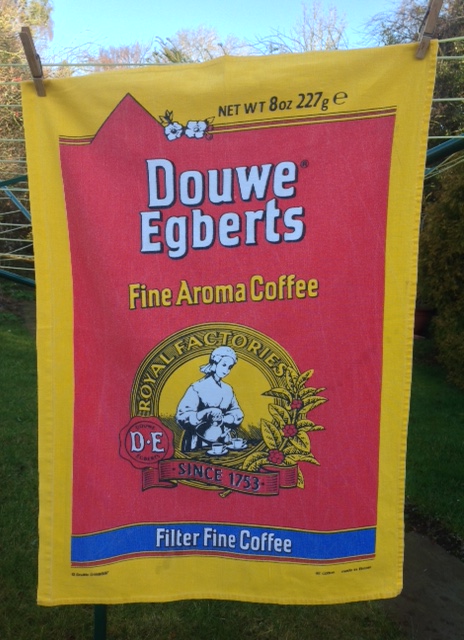 Other things I have acquired, through similar offers, and are still in use, include a Maxwell House 25th Anniversary Denby China mug from the late 1970s, a Dolmeo wipe-clean apron from the 1990s, a set of glass dessert bowls got with petrol tokens in 1970s and a Wild Cherry Tree from an organic cereal company.  The tree arrived as a 12 inch sapling in the early 1990s and must be 25 feet tall now.  Great for the birds but not so good for seeding itself around the garden!”

Now that is a fine collection of tea towels: the Cornish Recipe one is an old design and still very popular.  I was given one recently, unused, but there are a number on sale on eBay.  I also have the Pooh Bear one, bought in New York in 1998, because I couldn’t find a tourist tea towel and I needed something to remind me of that visit.   But I bet the Douwe Egbert one is worth, relatively, a lot of money.  Kate must be a great finder of ‘offers’ because I have never seen an offer of a Wild Cherry Tree, and I wish I had but I do have a set of Kelloggs Cereal Bowls from 1980s!

Thank you Kate for sharing your tea towels in the Virtual Tea Towel Museum.  Your selection is a classic example of how ‘Every tea towel tells a story’.  I loved them.