My previous interviews, in In Conversation With…, have focussed on tea towel designers, whether they are artists, textile or graphic designers; some may sell their tea towels themselves, do it on commission, or both.  Virtually all own their businesses.  I haven’t, as yet, found people who just sell tea towels and that would agree to be interviewed, until now.

I love a vintage tea towel (actually I love most things vintage).  You can often find them at Car Boot Sales or in Charity Shops.  There are some on eBay, at horrendous prices.  Then I found, through Twitter, @WatsonsVintage whose strap line says “I am a lover of all things ‘Vintage’ and ‘Retro’.  I sell these via my Etsy shop.  I also sell pre-loved and new clothing and an eclectic mix on eBay”  Sounds like my sort of place.  I really like the fact that Rachael sells vintage wrapping paper, greetings cards and sewing patterns.  They are worth a look at.  Back to the tea towels.  I have to say that I have never seen one like the ‘Siamese Cats’, possibly a bit creepy, unless, of course, you like Siamese cats.

I was interested in how Rachael organises her business.  “I run my business full-time.  I was working part-time but for health reasons I found it easier to run the business full-time.  The Etsy shop has been opened since 2017.  I have learnt a lot through the last two years since I started.   I am really happy with keeping my business as a small manageable concern so I don’t have any major plans for the future.  I don’t have an eBay shop but I do sell some of my modern tea towels through eBay, when I have them”

Rachael sells a lot of tea towels; I wondered why she has chosen to sell tea towels alongside her other items: “I decided to sell tea towels initially as they fitted in with the Vintage side of Etsy.  I realised that my overseas customers have a true passion for tea towels and often use them as wall hangings.  Over the last two years, I have really grown to love tea towels, as each and everyone of them holds a memory.  I have bought some from Car Boot Sales, sometimes that have come from someone’s late Mum’s collection, and have had lots of lovely conversations about this.  They have always been so carefully treasured, and looked after too.” 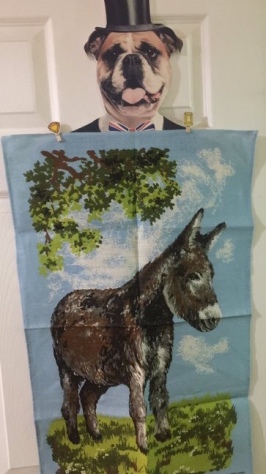 Rachael displays her tea towels with the help of a bull-dog and I wondered why: “The dog that holds the tea towels is an English Bulldog, like my Watson (is that Rachael’s own dog?).   I always use him to hold the tea towels, as it fits with my shop”

I wondered if the retro/vintage theme stretched to her home: “My home isn’t decorated in Vintage Style but I do have a very eclectic mix of different styles throughout.  My home office has some vintage pictures in it though, to give me inspiration.”

And now to her favourite tea towels: “I don’t have a favourite tea towel that I have sold, as I love them all!!  Perhaps, ‘Cries of London’ is a favourite.  It was one of my earliest buys and I do have a soft spot for it.  I absolutely hearing back from my customers, via feedback, that my tea towels have been received with love in their ‘forever homes'”.   My soft spot would be for ‘The Land of Beatrix Potter’, a Pat Albeck design, which is no longer for sale, because a friend of mine bought it for me and is part of my own collection!

Thank you, Rachael, for speaking with me.  I have really enjoyed looking at, and hearing about, your tea towels.  I will keep an eye on @WatsonsVintage because I am sure to find some really good tea towels to add to my collection.