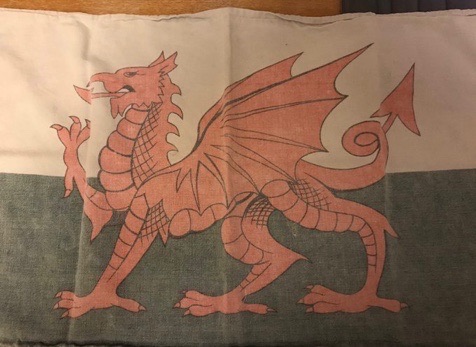 I realised today that I am becoming somewhat obsessive about gathering Tea Towel Stories.  I am very conscious that many people have memories, and stories, associated with a tea towel.  They aren’t necessarily big or dramatic stories, but just a small part of their life, their history.  I do think it is important to record those stories; I say that as someone who has written more than 860 stories, associated with nearly 1000 tea towels.  I realise that not everyone feels like that and one such person might be Al, who probably wasn’t expecting this when he woke up this morning.

Al is someone I have ‘met’ on Twitter; I love his Tweets, often amusing, or even outright funny, and a lot of them.  I look forward to seeing his Tweets, they brighten up a cold, wet, storm-ridden day.  Today, @PastPostcard tweeted a postcard with a picture of a Welsh Dragon with the message “I know this is kind of personal, but do you have girlfriends?”.   Al will often make up a response to such messages.  I sent a tweet saying “I’ve got a tea towel like that!”  There was a surprising comeback: “So have we!” says Al.

“I’m thinking that you would make an excellent Guest Tea Towel 2020. Do you fancy the challenge?” I reply.  Now this is where it becomes dangerous to use an emoji!  Did Al realise that a ‘Thumbs Up’ emoji would be taken, by me, as an agreement to take part?  He sent me a photo of said tea towel and that was that, from my point of view: a new Guest Tea Towel 2020.

“That’s brilliant and that will do.  You will soon go international!” I said

“Oh no I’m not.  Never joke about a tea towel, serious business these tea towels” I replied

“I’d forgotten you were the famous tea towel lady and those emojis were my reply to what I thought was a wee joke…..  The Welsh Dragon was given to my wife, Liz, and she was given it by a dear friend who lives in Wales, at least 20 years ago and we only use it to clean windows with (I expect you can hear my sharp intake of breath).  It is very faded but the linen material is very good for glass”

It doesn’t take much for a simple, well-used tea towel to become a Guest Tea Towel Story. Thank you Al, I hope you didn’t feel pressurised, but I love the tea towel; mine isn’t linen, just very cheap material.