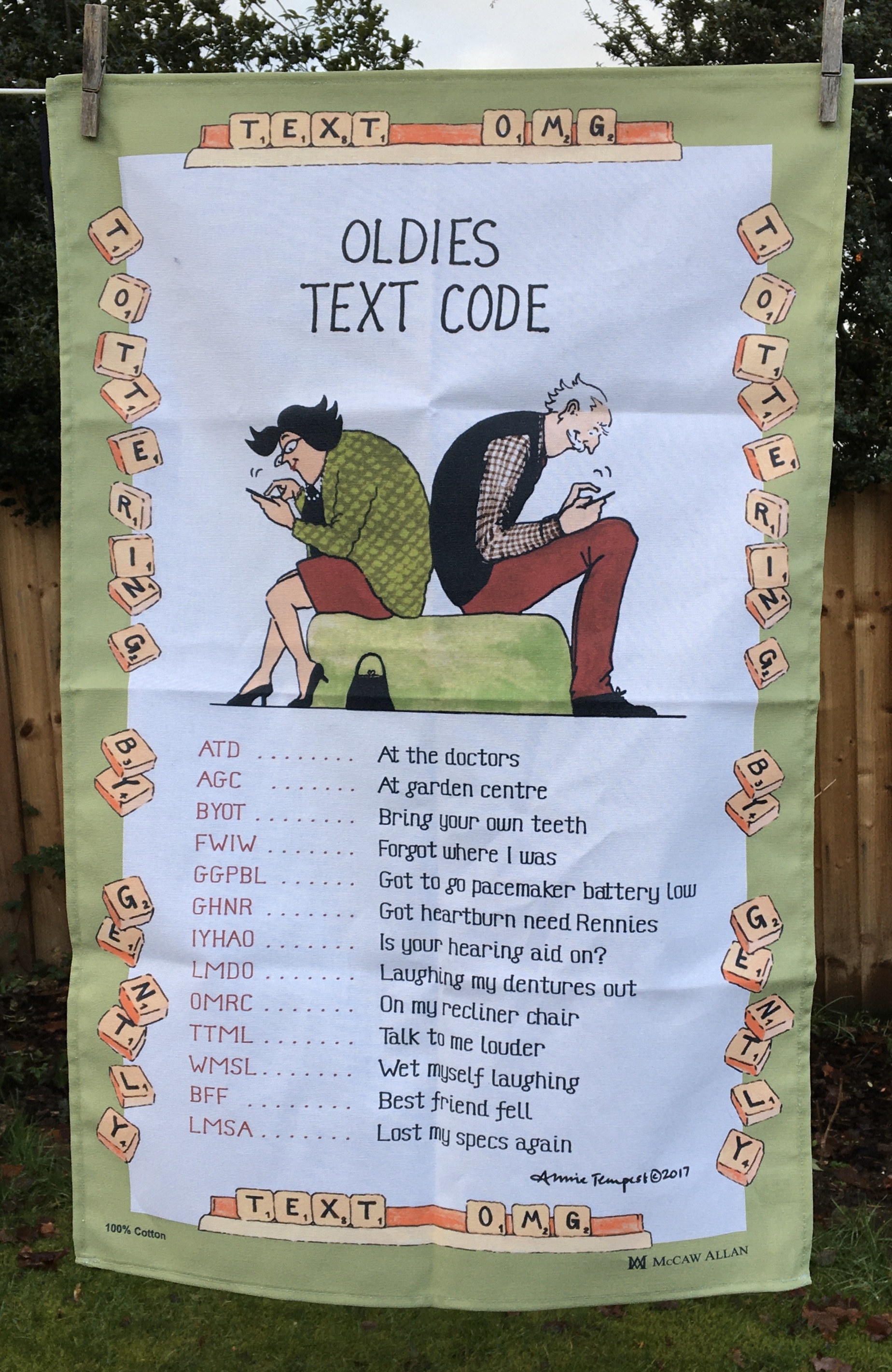 It seems ages since I typed out a Diary of Catherine’s. Post has taken a long time, events have taken over and who knows which Tier we are in‽ The tea towel I am using today, arrived as a ‘surprise present’ from Amanda, Catherine’s daughter, and it is so appropriate!

I managed to catch the Food Bin men, to give them their Christmas sweets, and they opened my two bleach bottles as well. If I need letters posting, they would also do it, which I thought was kind. Amanda and Wade came round with cat food, 30 tins for Tilly and 16 boxes for Tinker and Blackie, plus my Number 34 print-off. Should last them until January at least. I have exhausted all the films on the Christmas channel. Channel 5 is keeping me in good stead, though today they were a bit rubbishy.

Quiet morning. This evening I went to Amanda’s to watch a ‘Virtual Carol Concert’ for the Alzheimer’s Society. In an hour, over sixty thousand pounds was raised which I thought was great. On the way home, Amanda did a detour through Woodcroft. A gentleman, who does one of Amanda’s classes, has decked his house out with Christmas decorations. All lit up, it was brilliant. I felt emotional and you can donate as he does it every year for charity. When I arrived home the ‘Gang’ appeared out of nowhere with their mouths open! What’s new!

Up very early to feed the cats. 4.30am madness, put the heating on, made a cup of tea, went back to bed. Up again at 7am, shower, breakfast. Amanda arrived at 8.30am for an expedition to Tesco and Pet Smart. My first encounter with the ‘Traffic Light System’ in Tesco: green light go straight through. Overspent again. A Christmas film I watched said traditions connect you with the past so I bought Bruce a little bottle of Glenfiddich, which I will drink for him (his favourite drink). I also bought Mr Kipling Christmas Cake Slices, Bruce loved Christmas cake. After I got home, I took most of the Christmas items upstairs but Mr Kipling only made it half way, so I brought them down again, made a cup of tea and ate two slices! Delicious. Will the rest last til next Friday? Who knows? (No, they didn’t)

In Pet Smart I bought two bags of cat litter, new cat tray for Blackie and a big bag of bird seed. The two best parts were being out with Amanda and NO CAT FOOD IN THE TROLLY. I felt really happy today and this afternoon I thought it felt like Christmas Day!

Up early again. I try to feed the cats late at night but they still wake me up early, perhaps I should put a drop of wine in their food and knock them out! (Only joking). Made myself tea, breakfast, washed two cat trays, put in fresh litter, shower, went to the shop for a paper, met spaced apart (or socially distanced as we say) three people on route. Great talking to real people. Home to do crosswords. Went mad. I made a Vegetable Soup, pleased with myself. Had a phone call from Christine. She should be out of hospital next Wednesday. They are going to give her a Hospital Bed and a hoist in her flat. She will be glad to get home.

Had a visit from Jennie (Amanda’s friend). She stood at the end of the footpath; we chatted for about half an hour, really cold it was. At 2.15pm there was a knock at the door and it was Vivienne and Michael, checking to see if I was alright. So I thought it was a good day. The news at 3.30pm saying we were probably going into Tier 4 which I hadn’t heard about before. Good news!! Bill Bailey won ‘Strictly Come Dancing’. I personally didn’t know much about him. He deserved to win. I clapped my hands and Tinker looked up and asked what that was all about. It made a change for an older person to win.

I was going to skip Sunday but then I remembered what I did. Bought the Sunday Express, normally the Christmas one has a big crossword but I think now must be on the day after Boxing Day. I texted Barbara for help. She did 39 questions (a record). £1000 at stake. If we win it will go to a celebration. How lovely that would be. We need something to look forward to.

Shortest day of the year; summer is on it’s way. I was going to town this week but because of the variant, now not going to risk it. People are panic-buying again. Where are they putting it all? Christopher (brother) phoned. What a surprise to hear from him. He seemed to be in fine fettle.

A lay-in today. A big mistake. On the way to the bathroom, I trod in sick (cat), went down the stairs and trod in cat fur ball sick! (Just tell it as it is!). There I am at 8 am, scrubbing the carpets, not a ‘happy bunny’. Had tea, pills, breakfast, shower then I watched the last ‘Jeremy Vine programme’. I will miss him and Dr Sarah Jarvis. I found him to be a ‘lifeline’. He gave us information and frivolity. Still, he is back on January 4th. I’m getting into ‘The Yorkshire Vet’ on Channel 5. The only problem being that I don’t like watching operations (humans or animals) so I cover my yes till its over. I am missing the Christmas films on Channel 5, do find the odd one but that’s it.

A knock at the door, there stood two ladies (Joan and Carol) and handed me a bag of Christmas presents. I burst into tears. I was so surprised. Bruce and I knew them from parking the cars in the same garage area. We always said ‘hello, how are you?’ They didn’t know about Bruce until the beginning of the year but now when I see them, they will stop for a chat (at a social distance) which I like. Another unexpected present was from the next door neighbour (the one who put his concrete in my bin without asking). A bottle of wine and some biscuits, a nice surprise.

I was going to treat myself to a smoked salmon and cream cheese croissant and Bucks Fizz for breakfast but ended up having my 365 day breakfast, one and a half Weetabix and a mug of tea! I went upstairs, sat on the bed and opened Barbara and Liz’s presents: lined notepaper with a beautiful pen, so smooth and four colours in it. I will have to meter it out as it won’t last forever (Dear Reader, you do not appreciate the weirdness of reading a letter that is randomly written in red, blue, green and black, sometimes every other word, sometimes different lines). I love it. I opened another present, a fridge magnet with a boy posting a letter into a letter box, a big red one. Already on my fridge. The biggest shock was to come. OMG, a bloody Christmas decoration in the shape of a sprout with a hat on. Are you and Liz bonkers? Barbara sent a text saying it would remind me of the joys of 2020!!! I suppose the thought was there.

Amanda phoned to say she would pick me up at 11.30am. Had shower, dressed, did cat trays, recycling then got lunch for the cats ready as I was going to be out. It was an early lunch; as I put it on their mats I said “don’t eat it all at once, it has to last the whole day”. Well, they didn’t take a blind bit of notice of me (I wonder where the phrase ‘blind bit of notice’ originates), whoosh and it was gone.

Arrived at Amanda’s, glass of wine before we opened our presents. We had our starter, prawns in batter with a spicy dip. I enjoyed it. I received two calendars, one of them had Amanda’s cats on it, plus photos of Amanda, Wade, Bruce and myself. I got two diaries; I do love a diary, and a box of moorish salted caramel truffles. More tortured punishment to come in the shape of a green square box, a jigsaw of Brussel Sprouts, 100 pieces and it says on the box that it was hard to do. I ask you, why me Amanda?? Wade did a superb dinner. I had so much turkey that I couldn’t eat my roast potatoes so I brought them home. Wade is a marvellous cook. BTW, we were sprout-free!

After watching ‘Home Alone 2’, which I had never seen before (you must be the only person who hasn’t), it was really funny, Amanda put on a DVD of Bruce’s 60th birthday which she had taped. It was really funny to watch again. I remember packing Bruce off to bed early, then Amanda and a family friend, John, arrived and they decorated all downstairs with banners and balloons. They bought a ‘Bob the Builder’ cake with 60 on it. The best bit was Amanda, with the lit candles, going upstairs. I was behind with a tray of champagne-filled glasses. John was filming. Amanda said “Hurry up, my hands are getting hot from the candles”. You can imagine what a shock her Dad got when we went into the bedroom. It brought back great memories.

I had a great day with Amanda and Wade. Thank you.

Sounds like a really good Christmas, even in these uncertain times, creating great memories!