In a family where you have no siblings and no children, it is still possible to have a lot of cousins. I love the term ‘Cousin’ because it is the only gender-neutral relationship that there is around. So let me introduce you to Rachel, my cousin. The last time I saw her was on her father’s 70th birthday and before that she was about 10 years old (and I have the photos to prove it).

In December 2019, I had this great idea. When I sent out my Christmas cards I sent a ‘formal’, written invitation, offering people the opportunity to be a Guest Tea Towel 2020. I wasn’t expecting a big take-up from this exciting opportunity but it was much better than I thought, mainly friends, no relatives.

“I am taking this opportunity to attach a couple of photos of my favourite tea towel… it’s been on my list to send you details for over a year. I still have the note you put in your Christmas card just over a year ago, but as you may be able to tell from this, I’m not my mother’s daughter, with regards to being organised!

This is not my favourite tea towel because I particularly like the picture, or have any affinity to the place pictured, but because it used to belong to my Granny, so when I use it, I think of her.  My Granny was not a stereotypical grandmother; she didn’t spoil us, give us lots of treats or allow us to do whatever we wanted. There was always a list of jobs to do, especially for me. My brother always seemed to get the better deal, as he was allowed to go outside and “help” my Grandpa.  Helping Grandpa entailed playing in the woods, collecting branches and leaves for burning and tending the fire, which Grandpa had alight every day in the woods which formed part of their garden.  I had to help Granny in the kitchen and do fiddly jobs like peeling tomatoes before I was allowed to escape and join them!  But she was an incredible lady, so kind and generous, always doing things for other people. She was a real force of nature, full of energy and life, and so resourceful. She never wasted anything, and she loved all her grandchildren very much and was always so proud of all our achievements.  She died in 2003 from cancer and at the end of her life she was very weak and had to spent most of her time at home resting. I was fortunate that, at the time, I was living with my parents so my Mum and I would go and visit her and I got to spend some very special time with her as an adult, appreciating how amazing she was. I still had to do jobs, of course, but it was different and she would be telling us stories about her life and family and friends and as always be so interested in what all her family were doing in their lives.  After she died I inherited some of the contents of her kitchen, as I was the grandchild most in need of those things at the time, and I still have most of them, including this tea towel. I know how very happy it would make her that her things are still being used so many years later, and it makes me happy as it means she is often in my thoughts.

On a side note, the person who did spoil us was your mum, Aunty Bea. I have such happy memories of the times we spent at her house.  There was always a bowl of Quality Street, ready to be attacked, and we were allowed to race around on her footstools, repeatedly doing the circuit from her living room, through the dining room, into the kitchen, then through to the hall via the bead curtain and back into the living room!”

Now that is what I call a proper Tea Towel Story. Someone I know has referred to tea towels as a ‘Memory Bank’, a place where memories are stored on a thin piece of material, could be very personal family memories, memories of holidays or even just as a memory jogger to other things, in the case of Rachel being able to conjure up memories of my mother who died over 30 years ago. One of the things that I have always found sad is that after 30 years people do stop talking about people like my mother. I am touched that a tea towel of her Granny has brought those memories forward.


“Anyway apologies it has taken me so long to both thank you for the tea towel (The Cousin Explainer) and to send you a picture of one of mine.  I hope you are keeping well. I have read various posts on your Blog, some of the ones from Catherine and some of the other tea towel related ones. My favourite, that I often go back and read again, is the one you wrote about my Dad for his 70th birthday”.

I think a couple more photos of Rachel’s tea towel makes a fitting end. Thank you so much, Rachel, for your Tea Towel Story and I will send your son the pictures of you, on my Mum’s footstools, more than 30 years ago!!

PS: you’ve looked after that tea towel very carefully and I do believe your son will make a very good Tea Towel Model (I’ll remember that for the future) 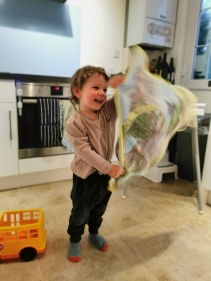