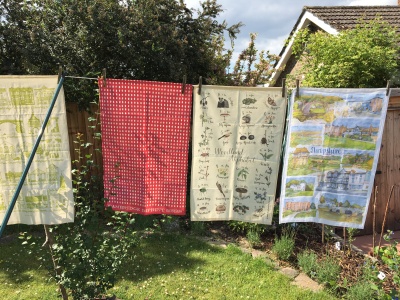 A note from Catherine on the back of her envelope “Yes I was thinking of not writing the Diary any more (as you suggested I might) but when I re-read it, once Amanda had printed it off, you put ‘Keep going’ so I will keep going till you tell me to stop. Thank you Postal Workers and Wheelie Bin People. Sorry Isabella (the cat), nothing for you”. I hope Catherine doesn’t feel pressured about writing the Diary but I know her family enjoy reading it. Catherine often sends Isabella (the cat) a quiz from one of the Clubs she goes to.

Lazy day, fed The Team early then took a cup of tea back to bed. It’s the start of ‘R’ in our Alphabet Game so I texted Barbara and Mary first, Christopher and Michael much later. Watched some TV then fell asleep. Got up at 11.40am, dressed and had brunch, half a pizza. Was going to do weeding, I have loads to do but the rain kept coming. At 7pm went to the post box and sent my Diary, dropped a birthday card and present at a friend’s house, save me doing it tomorrow. Tilly has her checkup at 10.30am tomorrow.

Up early, Vet Day, Tilly had that look on her face, as if to say “It’s me, isn’t it?”. Amanda took us. Still can’t go in. The nurse came and got Tilly. Vet said she was OK but she still needs to take the Lactulose once a day for the time being. And yes, it is still monitoring ‘outgoings’. Tilly flew out of the carrier when we arrived home!!

Club Day. Walked today via Staple Tye, bought myself a paper, magazine and a small white loaf. Fancied a crunchy one. I always have brown so it makes a nice change. A nice morning at the Club, took a taxi home because its raining again. Later on this afternoon we had thunder and lightening. I quickly shut the curtains and got Rupert (the bear). We sat together, he keeps me calm. Luckily, it didn’t last long

Sue and I went to town. We went to Primark and I treated myself to a thinner quilt and a new mattress protector. Now my dates are all disappearing as I haven’t written for a while. Some of my days are slow, not much doing, they seem to roll into one clump! I still enjoy writing my Diary, as I love writing but I do wonder if my ‘fans’ are getting tired of it. Well, cats are waiting for their late night’s supper. I’d best make a move. Three or four years ago, Bruce bought a battery-operated hedge trimmer and, I thought, surely that can’t be hard to use. I managed to charge the battery OK but slotting the battery into the trimmer was a nightmare. Every time I put it in, it slipped out. I reread the instructions and it said it has to ‘click in’ so I gave it a big push, with both hands and it ‘clicked’ into position. I was thrilled to bits. So I gave the bluebells, jasmine, a prickly plant beginning with ‘P’ and has orange berries, lavender and rosemary, sticky weeds and brambles a damn good haircut! Even the nettles were tall. The trimmer won’t cut thick stems so it is back to the bread knife for them. I then cut the front and back lawns. I filled twelve grass boxes full and it also filled up my garden wheelie bin. I was pleased to see the lawns looking smart again. As it is June now, the lawns need cutting again, though not so long this time.

I went to the Brookfield Centre in Cheshunt, a big M&S there. I needed some shoes. Amanda is taking me out for Afternoon Tea and I have to look smart. I eventually found a pair, so soft and comfortable. The style reminded me of my school lace-up shoes, though not laces but Velcro. I might persuade myself to wear them all the time instead of trainers. Off to bed, tired, making too many mistakes and using too much Tipex.

Sue and I went to Hoddesdon for a trip out. We had our lunch in Morrisons which was very nice, a lot of walking to get back to the bus stop. Apparently there was a ‘sink hole’ in the High Street and they had blocked the road off. Journey home was horrendous. Should have taken forty minutes but workmen had blocked Harlow turn off, though the diversion was a scenic route, the traffic was stop and start, arrived at Harlow Town Centre two hours late. So pleased to get home, cats were waiting for food but I told them, its bathroom and change of clothes first. They had no option but to agree.

No phone saga this time. Today, my WhatsApp disappeared but I managed to find it again. I don’t know why they get lost.

BBQ at Amanda and Wade’s, great afternoon and meal. In the next doors garden the scent of the roses floated over the fence. His garden reminds me of ‘The Secret Garden’, plenty of nooks and crannies, a haven for cats as well.

Going back to the Alphabet Game, when its finished we are starting it again. Barbara suggested a theme per week, so Christopher if you want to do it again, you need to donate at least six themes, give you something to think about on your holiday. Mary also suggested that after ‘Z’ that we write a 26 word sentence, or comments, that makes sense. You can only use commas, full stops etc in between. No tiny words like ‘a’, ‘if’, ‘and’, ‘but’ etc.

I’m off to bed, again using too much Tipex and I will surprise Barbara by sending this Diary to her, makes a change from Isabella getting all the mail.

Catherine likes to see A Hanging of Tea Towels so today’s ‘Headliner’ is just that.