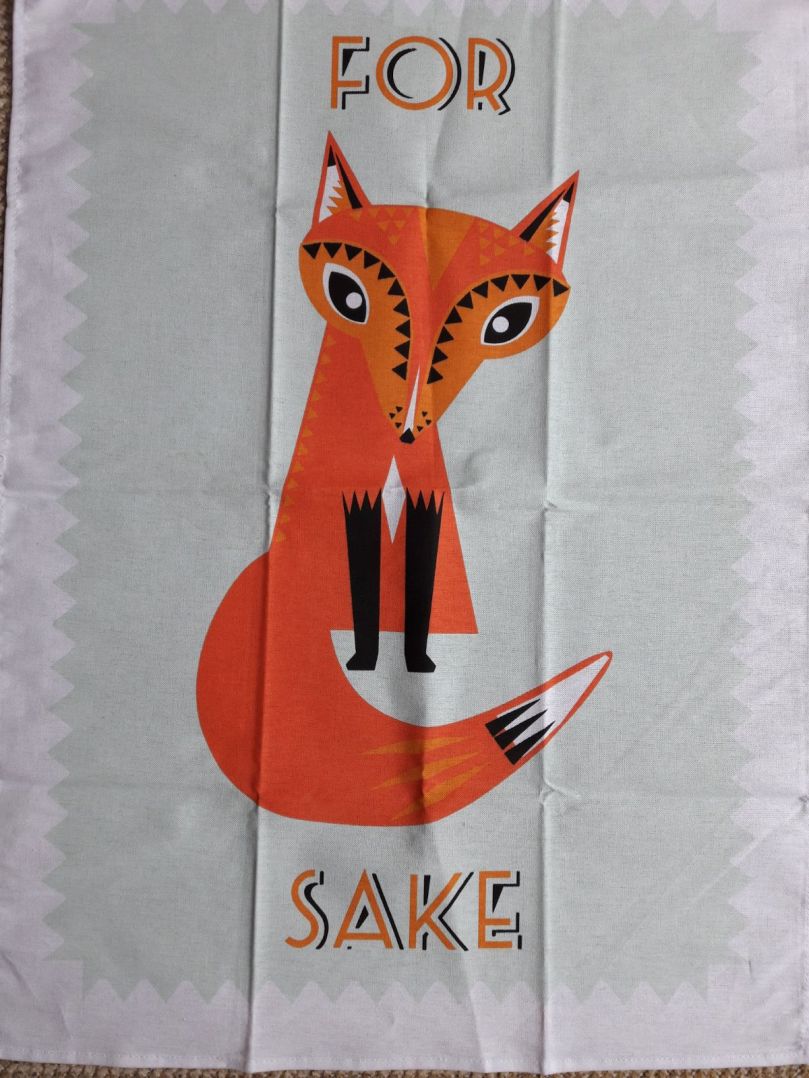 Let me re-introduce you to Fee.  Fee was my first Guest Tea Towel in July 2017.  She is a regular reader of my Tea Towel Blog; she is a good friend who I have known since October 1993; 100 years ago she would have been a Suffragette, today she is involved in women’s issues of all kinds; Fee is the person I would trust with my darkest secrets and who can be relied on to make me laugh at all times; Fee has interesting eating habits and who enjoys a meal out.  Fee is not someone I would have said had any interest in tea towels so I was very excited when she offered to write about her newest acquisition; her collection is gradually increasing!

”I’m a swearer; I like swearing and swearing likes me.  It’s just a very natural part of my self-expression.  Obviously, it wasn’t always (I tended to be a well-behaved and rule-bound child, sadly).  But since my early twenties, swearing has become more and more a marker of ‘me’.  I have a wide range of friends  and many swear quite frequently, and happily, but it is rare for me to find another in my circle who swears quite as often as I do.  Although I do sometimes have a behavioural effect on others, and there are at least two work colleagues, in my current job, who report a real liberation in hearing me put a voice to their usually unvoiced thoughts and give them scope to explore their full linguistic abilities.  My ‘Secret Santa’ present at work this year was a book called “How To Swear” so clearly I have the implicit support of the team to continue in my creative endeavours.

I’m not, however, a completely indiscriminate swearer.  There is nothing worse than the awkwardness of a swear out of place, or context.  I’m very carefully tuned into the language of those around me and will often test the waters with a light and breezy swear word and feel how it lands.  Often I am rewarded with an immediate swear response and then I know that I am in a safe space and can continue and take a few more risks with my lexicon.  Sometimes I tackle the issue head-on by asking a new group whether anyone objects to swearing and, with little exception, most people in the group are breathing a sigh of relief that the issue has been raised, and resolved.

There are, of course, those who genuinely find swearing offensive, and a verbal assault that is painful to hear.  These people are easy to spot instantly and then, of course, swearing will be off the menu in their company.  Then there are others whose relationship with swearing is slightly more complicated.  They tend not to swear at all, or only on the very light end of the scale and they do a good line in mock horror when they hear me playing merrily at the other end.  However, these people (and I have to know them well to know this) secretly love my big-stakes swearing, would love to feel more comfortable with an ‘F’ rather than a ‘B’, and gain vicarious pleasure from the fact that I so clearly, and loudly, do.

Barbara falls into this second category.  She does indeed swear, right across the spectrum at times, but is happier paddling in the shallows, and watching others diving into the deep end.  She also love a tea towel and a good play on words so this tea towel, that I was given at Christmas, is bloody perfect for her.”

Thank you, Fee, for that great article.  I do, however, find it difficult to imagine you as a ‘rule-bound’ child.  Unlike any email you have previously sent me, this article actually has punctuation!!  It’s also a great tea towel!!