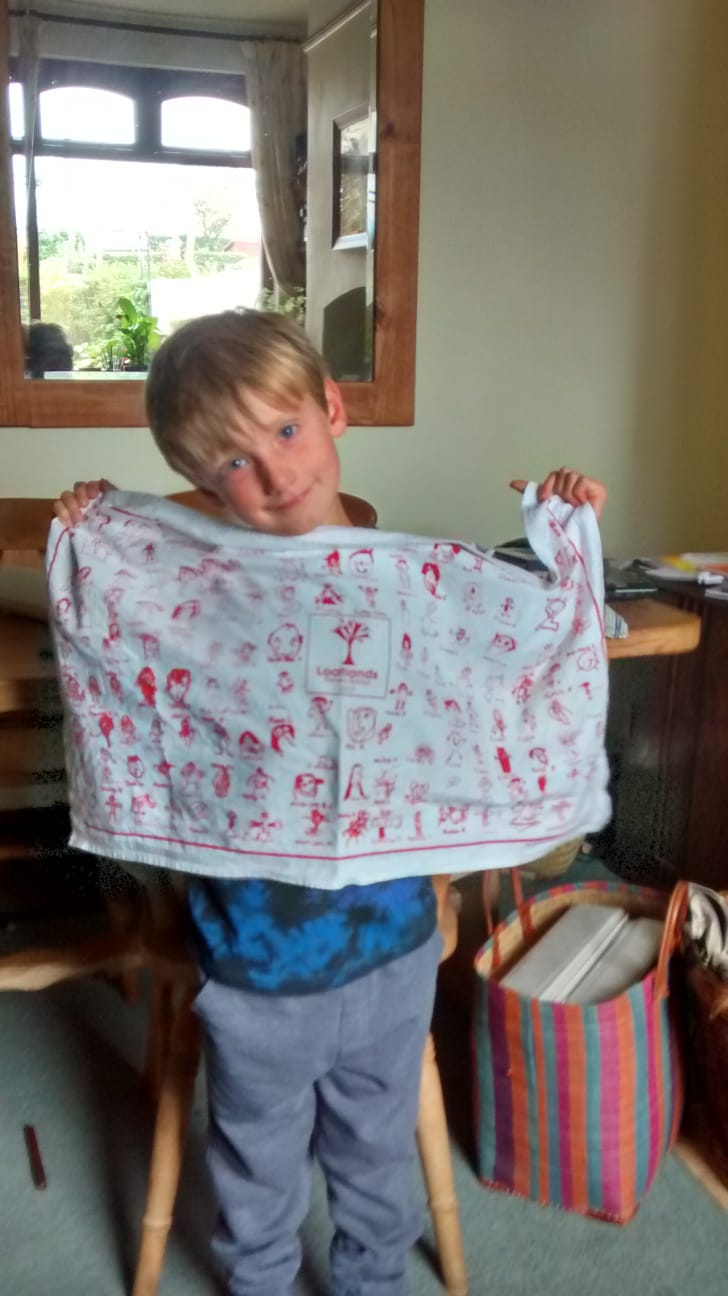 Isaac is my friend Gwyneth’s grandson.  I have known Gwyneth since 1976, since before she even had children, let alone grandchildren.  We went to Stockport College of Technology, training to be Instructors in Adult Training Centres.  Gywneth is the sort of friend that I can rely on if things are tough; she’s someone who I may not see for many months yet can immediately pick up on things as soon as we meet up.  Gwyneth is a true friend so she was an obvious choice to be a Guest Tea Towel in July 2017.  There were lots of excuses: her tea towels were in a suitcase in the hall which she couldn’t get at (unlikely); they needed ironing (everyone uses that excuse).  I gave up hoping she would prepare one then a couple of weeks ago she sent me Isaac’s Tea Towel Story.  Thank you Gwyneth; it was worth waiting for.

”Isaac, aged 6, is very proud of his school tea towel.  The children of Loatlands School in Desborough designed a tea towel to raise funds to add books to their new Library Corner.  Isaac said “All of the children drew a picture of themselves even if they were not used to drawing pictures.  Then all of the pictures were put on big paper and we went into the hall to look at them.  Then the pictures went to the printer people who made the tea towel.  My picture of myself  is in the middle.  I wasn’t very good at drawing then because I was only 4.  When the tea towel came back the mummies and daddies could buy them and that gave our school money for new books.

My mummy bought some tea towels and we made presents for people.  That makes other people happy …….. and the money made a better Book Corner in our school, that’s a good thing and it doesn’t matter if you can’t draw very well…… I think we are all quite proud of our tea towel”

After I received Isaac’s Story, I got an email from Gwyneth saying ”Isaac was really interested in our journey around the Tea Towel Museum, writing about his tea towel, posing for photos etc and would like to pass the info onto his school.  If you think his entry is fitting let me know, he would love to share it”

Of course Isaac’s Tea Towel Story is ‘fitting’, thank you Isaac and perhaps some of your friends would like to write about their favourite tea towel.  It would make a good school project.  Let me know!!