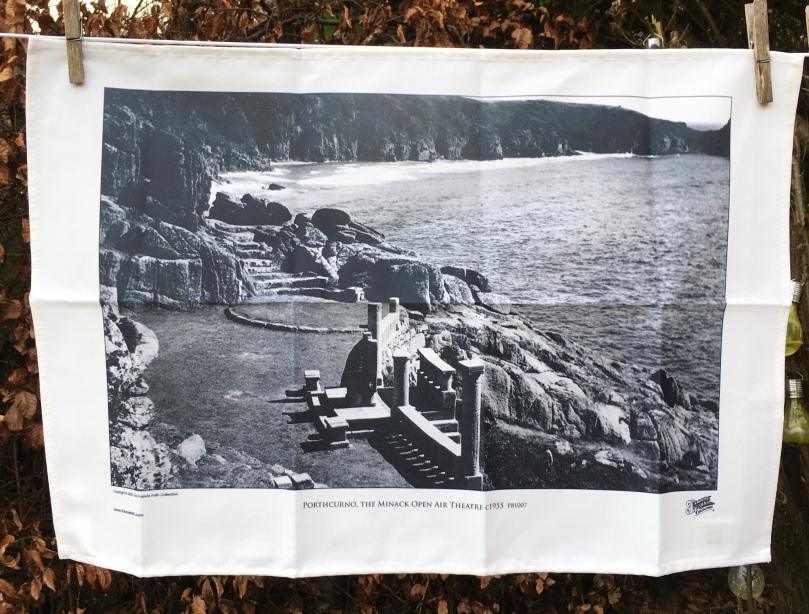 I’ve had a great response from the invitation I sent out with my Christmas cards, inviting people to become a Guest Tea Towel 2020.  When I say ‘great response’, I wasn’t even sure anyone would respond.  Many people think that my obsession with Tea Towels maybe ‘a bit odd’.

So I was very excited by the email from Alan: “We do not have a tea towel that has much meaning to either, or both of us.  However, I wanted to make a real donation to your real museum, assuming that this is still within the rules!  It will arrive separately by post”.  And it did!

So who are Alan and Sheila?  I met Alan in September 1973, when I moved to Long Eaton to start an MA at Nottingham University (I didn’t last long there and had to get a job).  I found a place to live, sharing with 10 other people that I didn’t know, in fact, had never met.  We were a mixed bunch, some at work, some doing PhDs (in a variety of subjects), some doing a teaching qualification, and me.  Clearly, it was a big house (if 11 of us were living there), with two communal kitchens; I belonged to the Downstairs Kitchen, as did Alan.  There was a rota for cooking for five people, doing the washing up, shopping and cleaning; some better at some tasks than others.  Alan, as I recall, was good at cooking, unlike me but I liked washing up.  For a calendar year, we shared 17 Breedon Street; for the second year, five of us moved to Castle Donington.  Those two years were very happy times and I have many photographs to prove it.  After two years, we all went our separate ways; we frequently met up and from 1976 Alan was one of the people who received my Christmas Newsletter every year.  Not long after, Alan met Sheila, got married and the rest is history.  I have some photos of their wedding which I am tempted to post!

Alan originated from Hayle in Cornwall; he was doing a PhD in Ergonomics.  I never did understand what that was or what job he ended up doing.  This is Alan and Sheila’s Tea Towel Story:

“As you are a dedicated theatre goer, I wanted to send you a picture of Minack Theatre, because this is where I discovered the joy of live professional theatre, back in 1960s.  It’s where I saw ‘The Crucible’, ‘Under Milk Wood’, ‘Oh What a Lovely War’, ‘The Tempest’ and many, many others.  It’s also where I started to appreciate that Shakespeare was writing for an audience, not school exams!  Over many performances we, and the cast, only really got wet once.  They were staging ‘An Old Time Music Hall’ (akin to the TV programme of the era).  It was slinging it down, but the Chairman said, if we sit there, they will continue, and so we, and they, did!  The sad thing is that I have not been back for nigh on 50 years, in which time it seems to have gone from strength to strength.  Just maybe I will this year?

The Minack has other earlier memories for me because in the mid to late 1950s, my Dad and I occasionally went fishing from the Minack Rock at Porthcurnow which is directly below where the theatre was being created.

The black and white picture on the towel is from the 1950s and comes from the Francis Firth Collection (www.francisfirth.com), as does the tea towel.  The coloured picture (at the bottom) is from the Gallery at http://www.minack.com and shows how magical the setting can be.

That is a great story (and a wonderful tea towel).  Minack Theatre is one of those places I have always wanted to go but never got round to it and now I don’t think I’d be fit enough!!  But it does always remind me of Derek Tangye’s ‘Minack Chronicles’ so thanks to Alan and Sheila.