I ‘met’ Claire (or rather windsweptgirlie) on Instagram.  I love Instagram; I have found so many tea towels and tea towel designers on there.  I saw one of Claire’s cushions and followed the link to her website, and there were the tea towels.  I wondered if she would be interested in being interviewed.  Fortunately, she said ‘yes’.

I’m always interested in the backgrounds of tea towel designers and the way they describe themselves:

“My earliest memories are of creating.  Sticking, sewing, painting.  I don’t think there was ever a moment that I thought ‘I want to be an Artist’.  It’s just what I do and I can’t imagine being anything else.  I have a degree in Ceramics, three glorious years of playing with clay.  Although totally different from the work I do today, my degree gave me the chance to explore my creativity without the need to be making a living from it.  I have always been an all-round creative person, eclectic, so have struggled to put a label on myself.  I dabble in many areas but if I had to choose one (label), I suppose I would currently say graphic designer……sort of!

And now about Claire’s business: 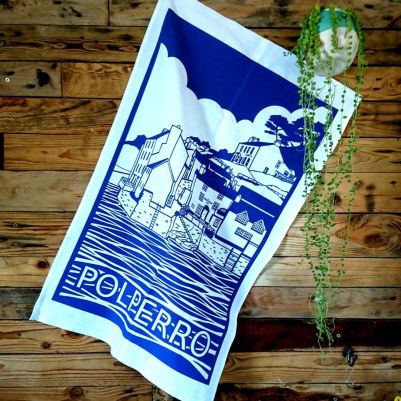 I am lucky to be based in beautiful Cornwall.  Six years ago, I had my first tea towel design printed (Cornish Mackerel).  It was a self-funded project which felt scary at the time.  I had no idea what I was doing but really wanted to get my designs out there.  I also design craft kits, illustrated gifts, homewares and greetings cards.  I have a wonderful network of independent shops that sell my work.  I also sell online, through my website and on Etsy.  I also do Christmas Markets, as most of my products are geared towards the gift market.

Obviously, I need to know about the tea towels that Claire designs and I am fascinated by the ‘Stitch and Sew’ range.  I’m not sure I could bring myself to cut up a tea towel but she, and others, seem to have no problems with it!!:

It’s quite difficult not to get carried away when designing tea towels.  They are a perfect canvas for design.  I have so many ideas but unfortunately not the cupboard space to keep them all.  Due to print-run numbers, I only have one or two new designs printed a year.  Usually they are designed for the Cornish tourist market, a girl’s gotta eat!

I had been screen printing my designs myself, in my bathroom, to sew into stuffed cushions, which was just impractical.  I designed the Mackerel tea towel to appeal to tourists wanting a souvenir, but really I wanted them so I could cut them up and make stuffed fish!!  The Mackerel was quickly followed by a dedicated ‘Make Your Own’ Mermaid tea towel and then by ‘Make Your Own’ Wilbur the Whale.  To be honest, they were a total leap of faith.  I had no idea if people would buy them.  I am happy to say I have sold 100s of Mermaids and Whales!  They really make people smile and I get wonderful feedback from customers.  They make the perfect ‘Posting Present’ and I have posted them all over the world. 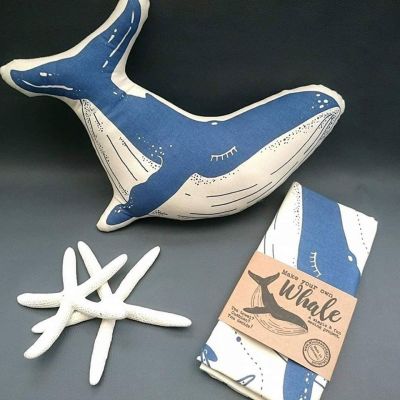 At this time, I couldn’t avoid asking about the effect of Coronavirus on Claire’s business and her plans for the future:

My studio is at home so, in many ways, I have been lucky.  There was a sudden surge in Craft Kits being bought online, as people wanted to be distracted, which has helped.  Unfortunately, on the flip side, my lovely stockists had to close their doors at what would have been the start of the Tourist Season.  Obviously it is a worrying time.  I have tried to keep myself busy and motivated; I have launched two new Felt Craft Kits, which had been on the ‘to do list’ for ages.  I just had not had the time to develop them.  I also have three new tea towel designs in the pipeline.  I also grew a lot of veg!!

The future? To just keep making!”

Thank you Claire for a very positive interview, at what is obviously a very difficult time for everyone. 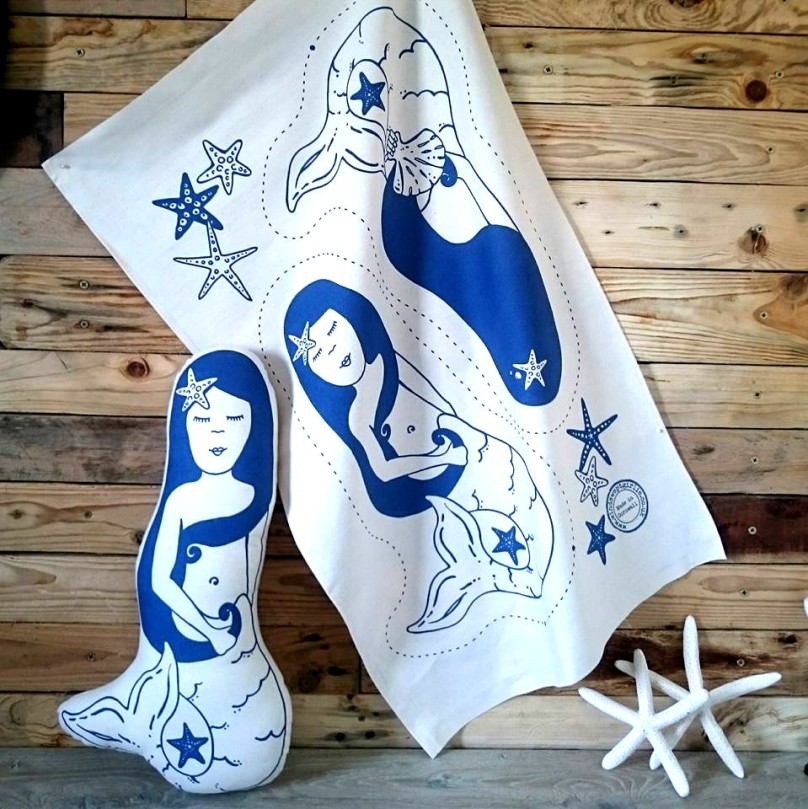 Originally, Claire hadn’t sent me the picture of the Mermaid but I didn’t feel I could post this article without the great picture.  I never thought I would be admiring a tea towel of a Mermaid but it’s great!