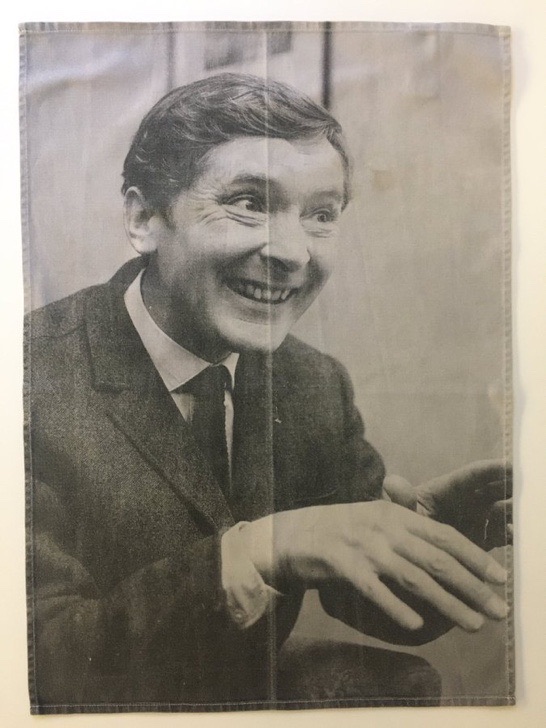 For anyone who has looked at #TheGreatTeaTowelSharing on Twitter, this might be a familiar tea towel. I simply love it. I’m not a Carry On…. fan, nor even a true Kenneth Williams fan, but I think this tea towel is absolutely charming. It was shown on @myteatowels on 21 January 2021 in a Blog called ‘Tea Towels and Lockdown (9)’. I didn’t give it ‘Headliner’ status because I really wanted Geoff to write his Tea Towel Story.

So, how did I get to know Geoff? Through Twitter, of course. At the beginning of Lockdown Number 3, I posted a Tweet asking people to share pictures of their tea towels for inclusion in Virtual Tea Towel Museum. Geoff came forward, very early on, with a tea towel or two, plus number tweeted comments, retweeted Tweets, engaging with the much wider circle of people he knows on Twitter. He took on board the meaning behind #TheGreatTeaTowelSharing and I knew he would be a great Guest Tea Towel. Here is his story:

“With apologies for the extreme delay in getting this across to you. Here are some details about the Kenneth Williams tea towel you asked for.

The tea towel was a birthday present in 2018, from an old and very dear friend of mine, Queenie. Suffice it to say, we met around 1997/1998, through a mutual friend. We struck up an immediate friendship, based on a shared love of coarse, lavatorial and saucily ‘camp’ British humour, as exemplified by the ‘Carry On…’ and ‘On The Buses’ films. For that reason, she refers to me as ‘Arthur’ (as in Arthur Mullard) and I refer to her as ‘Queenie’ (as in Queenie Watts). Over the years, she has always given me Christmas and birthday gifts which refer in some way to ‘Carry On…’ films, ‘On The Buses’ or ‘Miffy’ (but that’s another story).

I love the tea towel for a variety of reasons. Firstly, it reminds me of Queenie. Secondly, it reminds me of saucy and ‘camp’ British humour and makes me smile every time I see it and use it. Thirdly, it reminds me of Kenneth Williams, a true comic genius. The photograph of him is particularly good, as it looks lifelike and natural, and I can imagine him messing about as I look at it. Given what a tragic private life he led, it’s nice to think of him in a happy frame of mind. When Queenie first gave me the tea towel, I thought it was too nice to use and kept it for best. I then decided to start using it about a year or so ago, and it has become an everyday tea towel. This explains why it looks a little worn round the edges these days from being washed and ironed regularly. It is a much-loved possession. When I use it, I make sure Kenneth’s face is on the side which faces away from what’s being dried”.

Thank you, Geoff, for a great Tea Towel Story. The best tea towels should always be used for wiping up, gives you the opportunity to reminisce.